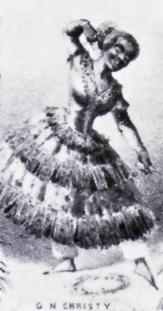 George Christy was probably the first famous female impersonator in minstrel shows when he played the part of Miss Lucy Long in the 1840s. "Lucy Long" (1842) was among the many early blackface minstrelsy songs to be performed by a white male dressed up as a mulatta female. During the singing of the love song, "Lucy" would cavort about the stage, flirting with everyone.

At a time when anxiety about social roles was intense, the female impersonator, who actually changed roles, fascinated the public. By the mid-1850s most major companies had female impersonators (Wenches and Prima Donnas). Two of the most famous performers were "The Only Leon" and Tony Hart. 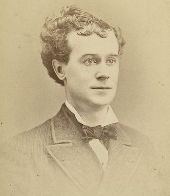 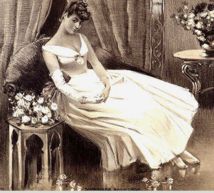 Advertising copy for Leon said, "Leon is the best male female actor known to the stage. He does it with such dignity, modesty, and refinement that it is truly art."  Trained as an operatic boy soprano, he went on the minstrel stage at age 14, and revolutionized wench roles by bringing a subtlety and accuracy to his portrayals. He also trained in ballet and kept an extensive wardrobe of the latest fashions. He eventually became the highest paid performer in minstrelsy, and was so famous he was often billed merely as “Leon”.

After only 6 years on the road with different minstrel companies, he formed his own troupe with comedian Edwin Kelly. By 1882, Leon was the highest-paid prima donna in minstrelsy. Leon was imitated throughout the world of minstrelsy and he eventually copyrighted his performance name as "The Only Leon." In later years, the Leon and Kelly’s Minstrels disbanded, and Leon starred with the San Francisco Minstrels. The actual date of his death remains a mystery. After he left show business the real Patrick Francis Glassey just faded away into obscurity. Leon would have wanted it that way. 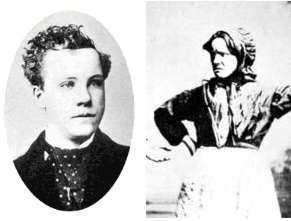 Tony Hart was described as, "best genteel wench that ever trod the boards." Tony Hart was the stage name of Anthony J. Cannon, who was born in Massachusetts and attracted to theater at an early age. His parents were less enthused about his theatrical leanings. In fact they sent him to reform school in an effort to keep him from the stage. But at the age of thirteen, he escaped from the Westborough reformatory and hit the road, doing stints as a bootblack, newsboy, and singer (not to mention joining a circus or two).

He began his career in minstrel shows as "Master Antonio, the Boy Soprano." He met Edward Harrigan in 1871, in Chicago, when he was 16. Harrigan teamed up with Hart for a highly successful thirteen years. From the onset, Hart played the female roles, beginning with "The Little Fraud" in which Hart was a "fresh-faced Dutch girl with a mellow voice."

The detective William Pinkerton, an expert at seeing through disguises, once refused to believe that Hart was a man even after being taken backstage following a performance and allowed to scrutinize his costume and make-up at close range. Pinkerton was not persuaded of the truth until Hart had pulled off his wig and let loose with a few robust phrases that could only have been learned in a boys’ reform school.

Harrigan and Hart were so popular that they built their own minstrel house in 1881 only to have it burn down three years later. They ended their partnership shortly thereafter and Tony Hart teamed up with his wife Gertie, often with both playing female roles. Tony's professional downfall came as a result of late-stage syphilis.

Eugene was acclaimed for his "delineations of female characters that were so finished, so true to life. that the Germans in Berlin during an engagement there in April, 1862, were emphatic in their declarations that he was a woman." He began with Wood's Minstrels where he was joined by George Christy in 1853 and ended his career thirty years later with the Leon and Cushman Company in 1883. During his career, "Eugene" traveled with many different minstrel troupes throughout the US, Europe and Asia. In May, 1884, he made his last appearance on any stage. "Eugene" was born in New York City, June 4, 1836; he died in Brooklyn, N. Y., January 18, 1907.

Ricardo worked with several well-known minstrel groups, including Kelly and Leon. "Ricardo" was well and favorably known as a clever female impersonator, was with Mrs. Matt Peel's Minstrels about 1863. Subsequently he appeared with the Associated Artists of Kelly and Leon in 1869. Early in 1870 he joined Billy Emerson's Minstrels, and in 1871 made his debut with Manning's Minstrels in Chicago. He was a member of Haverly's Minstrels in 1873. "Ricardo" was born in Ireland, about 1844; he died in New York City, October 30, 1883. 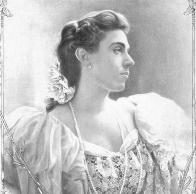 "Stuart" (Everett Stewart), who achieved international fame as the "Male Patti," began his professional career as a singer with McIntyre and Heath's Minstrels in Springfield, MO, in the Fall of 1887. And this is how it happened — "Tom" Heath sauntered into the Post office at Wichita, Kansas one morning, and inquired if there was any mail for McIntyre and Heath's Minstrels. Yes, indeed, there are lots of letters for the minstrel boys, said a real gentlemanly voice behind the window. Heath hired him on the spot and a few days later, Stuart "blacked up" for the first time in his life. Later, "Stuart" took his operatic voice and lavish gowns throughout the music halls of Europe from 1899 to 1908.

It was certainly a coincidence that the boy who had previously answered inquiries daily concerning missing letters, should have as his signature song, "The Letter That Never Came." 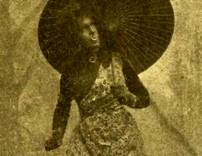 Fred Dart was considered one of the best and most versatile "wenches" in minstrelsy ; he was for many years with Sam Hague's Minstrels in Liverpool, and when Mr, Hague came to this country in 1881, Mr. Dart was with him, subsequently joining Carncross' Minstrels in Philadelphia, where he remained until the time of his death. Fred Dart was born in Liverpool, England. He died in Philadelphia, March 30, 1890; age 34 years. 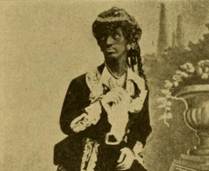 Rollin Howard (Ebenezer G. B. Holder) was one of the most cultured and capable female impersonators of minstrelsy. He appeared on the legitimate stage for about five years previous to his minstrel debut, which was made with Wood's Minstrels in the Spring of 1860. In the fall of that year, for a brief period, he was associated in the management of Howard and Campbell's Minstrels.

In 1861, he made his first appearance with Hooley and Campbell's Minstrels in New York, and for several seasons played successful engagements with nearly every prominent minstrel company there was. About 1870 he left minstrelsy, and after a period in opera, played several years in variety houses. In 1868 he played Topsy in "Uncle Tom's Cabin," and in 1878 was manager of the Melodeon in Philadelphia. Rollin Howard was born in New York City about 1840; he died in Boston, MA, June 19, 1879.

In May 1875, the Chicago Tribune described Stanley as "a male soprano" and "the greatest of all the female impersonators." Little is known of Stanley's life.

In 1875 he was with Haverly's Minstrels; September 2, 1879, he joined a dramatic organization in "Larks," and a few months later was traveling with Stanley's Juvenile Company. August 24, 1881, he opened with Brooks, Dickson and Clapham's Minstrels; the tour was a brief one and in November following, Mr. Stanley joined Leavitt's Minstrels. His next important engagement was with Emerson's Minstrels in San Francisco; here he met Gus Pixley, later forming an alliance, playing the variety houses for several seasons. His last show in Chicago was at the Olympic Theatre in November 1879.

J. Arthur Doty (Oakman) was a clever female impersonator, and a bright writer of sketches, burlesques, etc. In 1879 he worked with Fred Malcolm doing acts in the variety houses. September 11, 1886, he began an engagement with Simmons and Slocum's Minstrels in Philadelphia; subsequently, and for about eighteen months, he did an act with Belle Fairmont. J. Arthur Doty died in Detroit, Mich., April 13, 1890 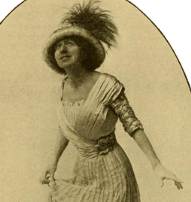 From chorus man to burlesque prima donna in two years is certainly going some; nevertheless that is the proud distinction accorded to Charles Hilliard, who made his first professional appearance with Frank Lalor in "Prince Humbug" in 1908, in the minor capacity already referred to. The following year Mr. Hilliard was engaged with Cohan and Harris' Minstrels, also as a chorus singer; before the season was over he was playing a prominent part in the after-piece. August 10, 1910, Mr Hilliard played for the first time, the principal female role in the "Fireman's Picnic" with George Evans' Minstrels' his success was emphatic. Charles Hurst was born in Sumter, SC, June 23, 1885.

Gus Mills achieved considerable popularity as a female impersonator with Simmons, Slocums's and Sweatnam's Minstrels in Philadelphia; Dockstader's in New York, as well as Emerson's and other well known organizations. He died in Chicago, Ill., October 6, 1903; age about 55 years.

Charles Heywood (Frank Haffner), who has an international reputation in minstrelsy as a female impersonator, posses a remarkably fine cultivated voice, which long experience has taught him to use to the best advantage. Mr. Heywood made his debut with an amateur minstrel company in Newark, N.J., in 1867, at the famous old Library Hall. In Jaunary 1868, he appeared professionally in New York with Kelly and Leon's Minstrels. My Heywood joined Haverly's Mastodons in London, in 1884. After several notable engagement in the music halls on the Continent, he returned to this country and subsequently built a theatre in Newark, N.J.

The prima donna female impersonators of the minstrel stage often eclipsed the minstrel companies with which they were associated and their popularity with their audiences is legendary. Prima donnas had their wardrobes detailed in newspapers and were interviewed extensively.

Later the blackface transvestites would adopt one of two distinct roles: that of the coal-black mammy, grotesquely disfigured and comically dressed in rags with huge feet, and the lighter-skinned octoroon, or 'yellow gal'. The latter character was portrayed as beautiful and desirable, and was the object of romantic songs. 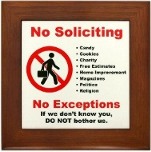